Botanicalm is a synergistic blend of botanicals historically used to support a sense of tranquility by reducing overstimulation and scattered thoughts.

The ingredients in Botanicalm work in synergy to induce relaxation by increasing gamma-aminobutyric acid (GABA) activity in the central nervous system (CNS). GABA is primarily an inhibitory (calming) neurotransmitter in the CNS that promotes a sense of tranquility and counteracts the effects of stress. While many traditional anxiety solutions that exert GABA agonist effects may cause dependency over time, the ingredients in Botanicalm are non-habit-forming.

1 capsule per day or as recommended by your health care professional.

Kava (Piper methysticum) is a perennial shrub native to the South Pacific. Kava extracts have been traditionally prepared as drinks by combining the rhizomes (underground stems) with water to address a number of health issues including stress, irritability and restlessness, muscular spasms and menstrual discomfort. The therapeutic effect of kava is based on the activity of the kavalactones. Kavalactones exert a calming effect by increasing the activity of GABA while simultaneously reducing excitatory neurotransmitter release. This results in a feeling of relaxation without producing negative effects on cognition. Several reviews and meta-analyses have revealed statistically significant evidence for the use of Kava Rhizome extract for fighting stress and restlessness when compared to placebo.

Valerian (Valeriana officinalis) is well-known for its calming and sleep-supporting properties. More than 150 constituents have been identified in valerian, many of which act synergistically to produce its stress-buffering effects. Compounds in valerian extract have been found to modulate GABA-A receptors producing a dose-dependent release of GABA. Valerian also decreases the enzyme-induced breakdown of GABA in the brain. In a double-blind study of 48 adults examining the effects of social stress, valerian was shown to reduce the sensation of stress and agitation without causing sedation.

Passiflora incarnata, also called the maypop, has long been used in herbal remedies for its calming effects. Numerous flavonoid components function as active ingredients, most by binding to the GABA receptor. A randomized, placebocontrolled trial including 60 people aged 25-55 scheduled for spinal anesthesia, showed those given passionflower experienced a significantly greater sense of calm before being administered anesthesia.

Used as a natural calming remedy for thousands of years, bioactive compounds in chamomile have the ability to bind to GABA receptors, modulate monoamine neurotransmission and also display neuroendocrine effects. In vitro animal studies of German chamomile and hops showed significant inhibition of glutamic acid decarboxylase (GAD) activity, exerting a calming effect. A randomized, double-blind, placebo-controlled study including 57 participants given either 220 mg chamomile or placebo for symptoms of low mood, observed significantly better scores related to a sense of calmness and relaxation in those receiving chamomile.

The hops plant, Humulus lupulus, is a perennial climbing vine that has been used for centuries for its relaxing properties, among other health benefits. Only the female hops, which produce flowers known as strobiles, are used for medicinal purposes. The active ingredients in hops include a volatile oil, valerianic acid, tannins and flavonoids. A full understanding of the biochemical mechanism of hops has yet to be achieved. However, preliminary research points to involvement of the GABA-A receptor. 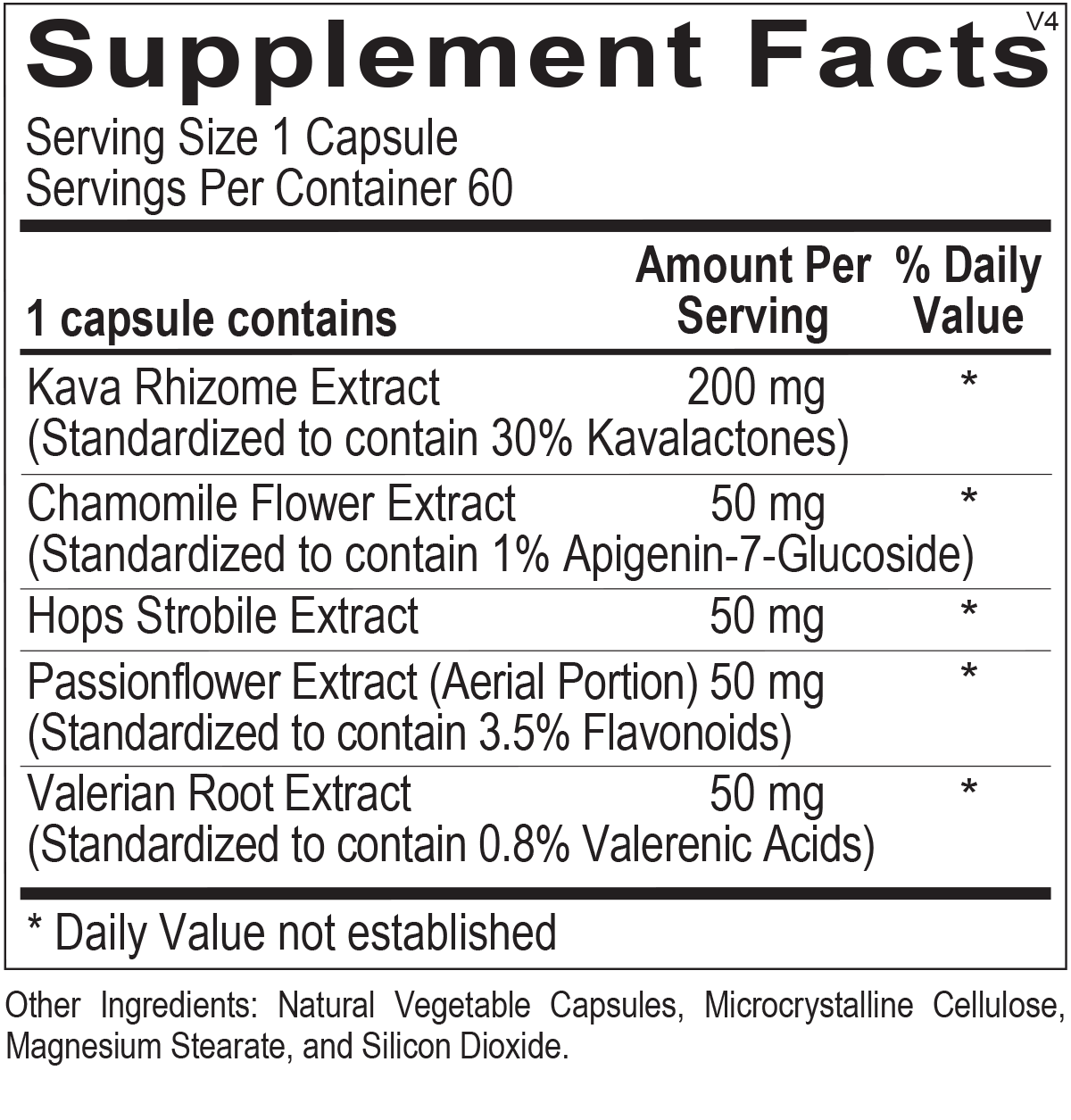 Be the first to review “Botanicalm” Cancel reply