The gastrointestinal tract is a finely balanced environment where roughly 500 different strains of bacteria compete for space and nutrients. The natural microflora balance can be disrupted by medications, such as antibiotics, or poor dietary intake. One of the key benefits of probiotics is their ability to increase populations of healthy bacteria in the face of microflora imbalance. In addition, extensive research has identified other broad health benefits, including supporting healthy bowel function, increasing the production of important short-chain fatty acids, which provide energy to the cells of the intestinal lining, boosting immune function, aiding in the digestion of difficult-to-break-down compounds like lactose and casein, and enhancing detoxification of harmful compounds.

Flora Bites is a delicious, chewable probiotic formula for children, designed to promote healthy gut microflora, protect intestinal integrity and support immune function. Each creamy, natural orange-flavored cube contains a 5 billion CFU blend of Lactobacillus acidophilus and Bifidobacterium lactis, as well as 20 mg of vitamin C for comprehensive digestive and immune system support. The strains in Flora Bites have been carefully selected for their survivability and adherence to the intestinal tract. The chewable cube form is an easy, fun way for children to achieve optimal probiotic support and a tasty alternative to a capsule or powdered probiotic.

Lactobacillus acidophilus is a beneficial bacteria strain normally found in the intestinal tract and mouth, and is commercially used in dairy products for the production of acidophilus-type yogurt. L. acidophilus ferments various carbohydrates to produce lactic acid, which increases the absorption and bioavailability of minerals, including calcium, copper, magnesium and manganese. The production of lactic acid also promotes health by creating an inhospitable environment for invading microbes. L. acidophilus has been shown to protect intestinal cells by competing for adhesion space in the gut against harmful bacteria, such as E. coli. The L. acidophilus strain in Flora Bites has been specifically chosen because of its strong adherence and survival attributes in the GI tract. It has been demonstrated in vitro to tolerate exposure to gastric acid and bile salts, and has the ability to withstand antibiotics including Ciproflaxin, Polymyxin B and Tetracycline. In addition, a study of 73 children (aged 3-24 months, with bouts of occasional diarrhea and mild or moderate dehydration) found those given 10 billion CFU of L. acidophilus had a decreased duration and quantity of watery stools than those receiving placebo.

Bifidobacterium lactis is predominantly found in the colon. A double-blind, randomized, placebo-controlled trial on subjects receiving B. lactis or placebo for eight weeks found that B. lactis supported a balanced immune response in individuals hypersensitive to environmental allergens. Studies examining immune development and dietary supplementation with B. lactis have shown that it supports GI health by reducing intestinal permeability. A double-blind formula controlled study of 80 infants, aged 6-36 months, were randomly assigned to receive a commercial formula containing B. lactis and Streptococcus thermophilus at the initiation of antibiotics for 15 days. There was a significant difference in the incidence of diarrhea in the children receiving probiotic-supplemented formula (16%) than non-supplemented formula (31%). 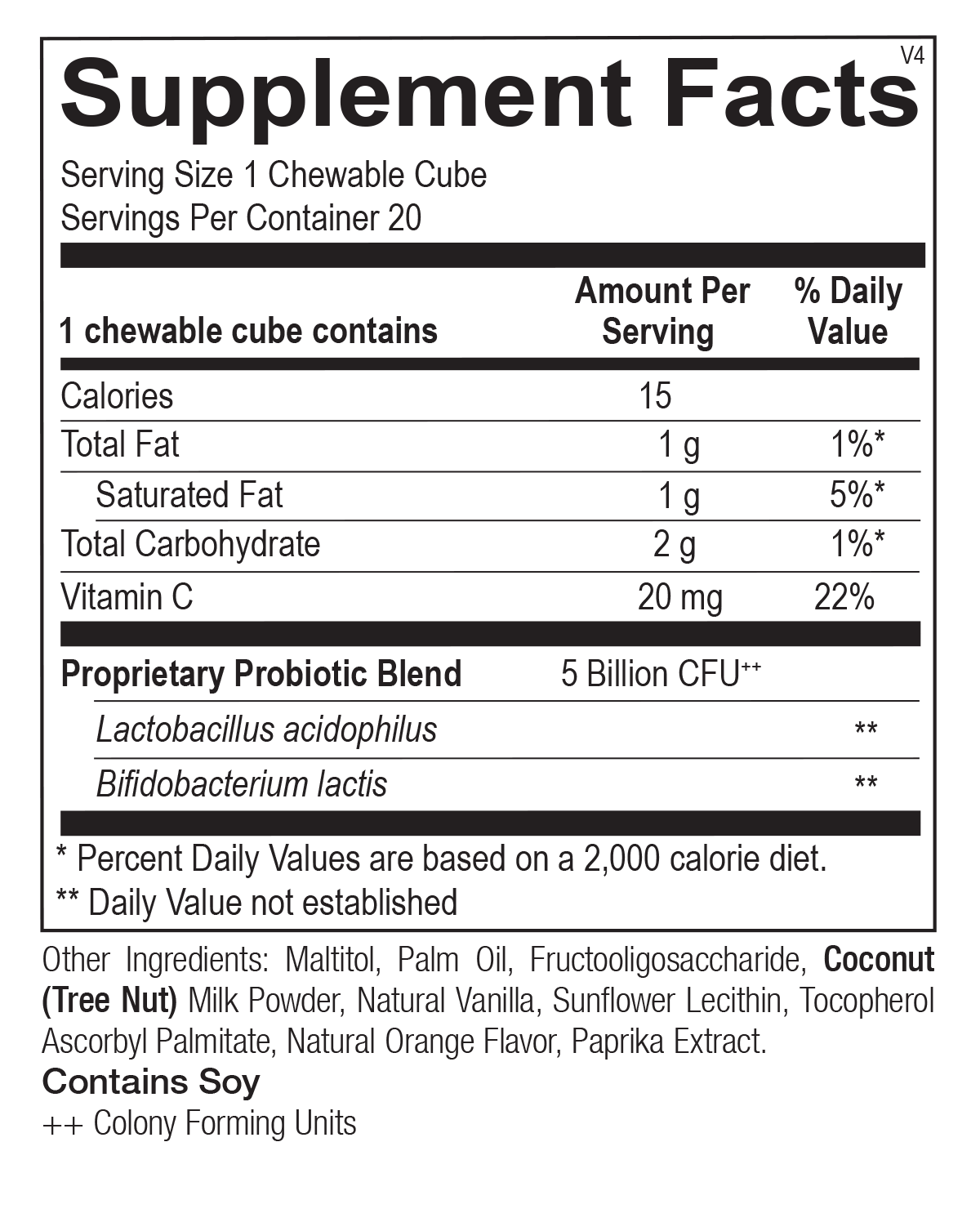 Be the first to review “Flora Bites” Cancel reply