SKU: 516010 Categories: Immune Health, Sinuses Brand: Ortho Molecular
For self consumption only. Not for resale.
Log in to purchase

Optimal sinus health requires adequate mucus flow and clearance throughout the nasal cavities. The sinuses are hollow cavities branching from the nasal passages. While the nasal passages are often colonized with bacteria, the sinuses are typically sterile under healthy conditions. The sinuses and nasal passages are lined with soft tissue, called mucosa, that feature thin, hair-like projections called cilia. Specialized cells of the mucosal tissue, known as goblet cells, secrete a thin layer of mucus to absorb microbes and allergens, such as dust, dirt, pollen, and mold, inhaled through the nose. Working together, cilia “beat” to move mucus and waste out of the sinuses and nasal passages. Upper respiratory challenges may impair this process, known as mucociliary clearance, and contribute to fluid entrapment within the sinus cavities.

N-acetyl cysteine (NAC) is a powerful amino acid that decreases the thickness of mucus. NAC helps to dissolve mucus by breaking disulfide bonds that create mucus density, allowing for easier drainage of mucus. In a double-blind study of 12 healthy volunteers with slow mucociliary clearance, NAC supplementation for 60 days resulted in a 35% increase in mucociliary clearance rate compared to no improvement in the placebo group.NAC is also a precursor to the body’s most powerful antioxidant, glutathione, which is an essential component of a healthy immune response.

Bromelain is a plant enzyme naturally found in the stem and fruit of the pineapple plant. Bromelain exerts a synergistic effect when combined with NAC due to its proteolytic (protein digesting) actions. Bromelain has been found effective for thinning nasal secretions with the additional benefit of balancing inflammatory responses. A clinical study conducted in Germany in 2005 found bromelain exhibited statistically significant results for supporting sinus health and soothing sinus tissues.

Berberine sulfate is a botanical extract found in the root and bark of various plants including Oregon grape root and barberry. Berberine extract has been shown to support immune responses by increasing blood flow to the spleen and activating immune cells, such as macrophages.Berberine maintains healthy sinus function by quieting localized inflammatory response through inhibition of activator protein 1 (AP-1)and thromboxane A2 from platelets.

Licorice root (Glycyrrhiza glabra) has been used in Eastern and Western cultures for thousands of years. The active components in licorice, glycyrrhizin and glycyrrhetinic acid, strengthen the immune response by inducing interferon activity, activating macrophages and augmenting natural killer cell activity.Glycyrrhizin exerts an inflammatory balancing response by inhibiting production of free radicals by neutrophils. Additionally, licorice has been approved by the German Commission E, a national scientific advisory board, for supporting respiratory challenges.

Andrographis paniculatahas been used in Eastern medicine for centuries. The immune boosting properties of andrographis have been researched extensively in clinical studies. In seven double-blind controlled trials, andrographis was found to be a safe and effective botanical for supporting upper respiratory tract health. In a study of 158 patients, a standardized preparation of A. paniculata dried extract administered for five days significantly decreased throat irritations and aided in drying nasal secretions. The active ingredient, andrographolide, has been found to modulate inflammatory response by inhibiting NK-kappa B.

Eleuthero root extract has been shown to support the immune response, especially in combination with andrographis. Two randomized, double-blind, placebo-controlled trials of the combination of Eleuthero and andrographis demonstrated the efficacy of this combination for respiratory challenges. In the initial pilot study, 46 subjects were given the combination three times daily for three to eight days. The second trial included 179 patients treated for three days. In both trials, significant improvement in nasal secretions, throat irritations and general immune response were reported.

Thyme has been traditionally used to soothe sinuses and loosen phlegm. Thymol, the active ingredient in thyme, has immune supporting properties and competes with pathogens commonly found in the sinuses and respiratory tract. The German Commission E has approved thyme to support respiratory challenges. 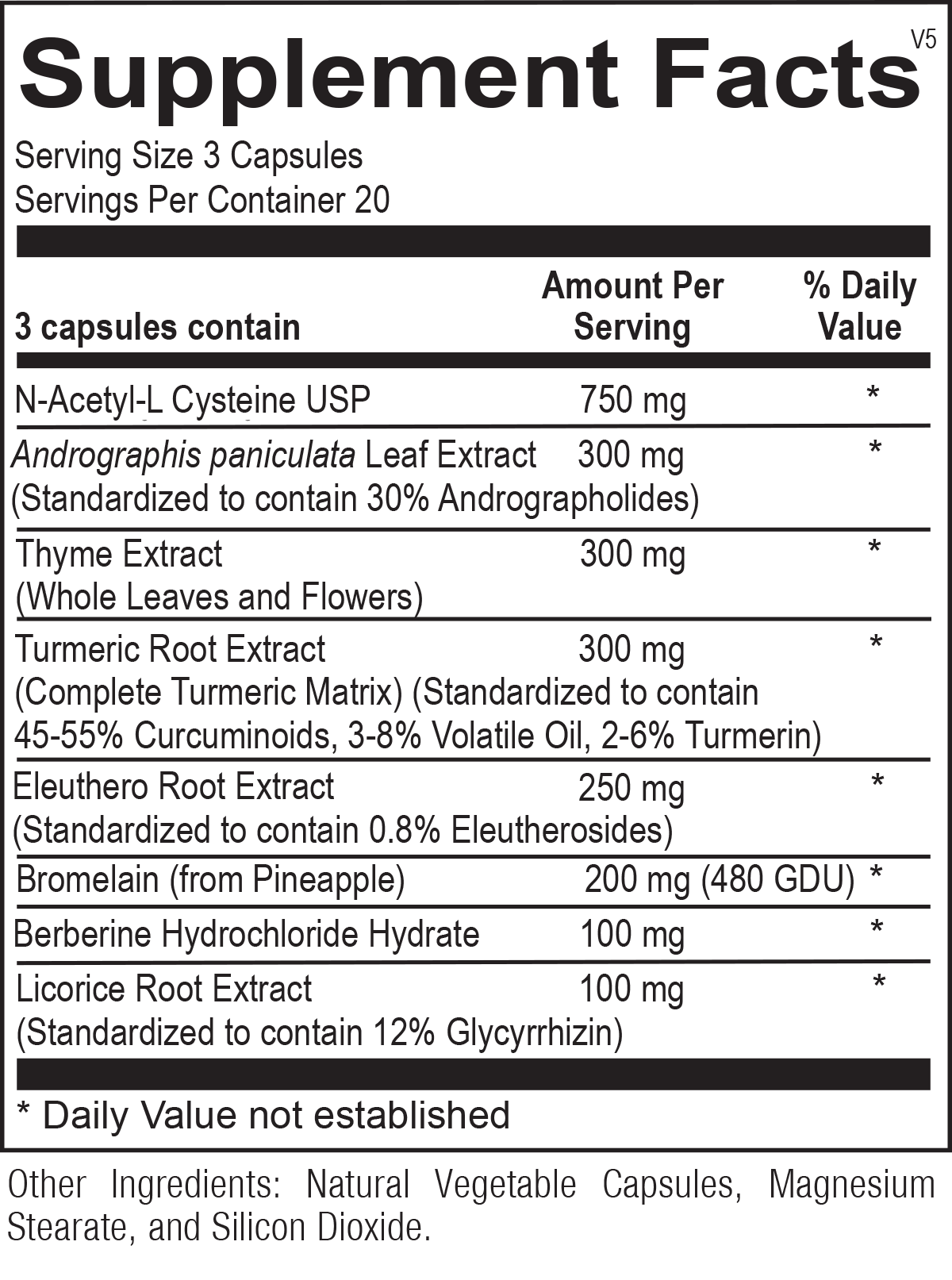 Be the first to review “Sinatrol Blister Packs” Cancel reply