The strains of probiotic bacteria in FloraBoost have been strategically selected based on research which supports their survivability and adherence to the intestinal tract. FloraBoost comes in a powder form for easy administration to children.

The gastrointestinal (GI) tract is a finely balanced environment where roughly 500 different strains of bacteria compete for space and nutrients. The natural microflora balance can be disrupted by medications, such as antibiotics, or poor dietary intake. One of the key benefits of probiotics is their ability to increase populations of healthy bacteria in the face of microflora imbalance. In addition, extensive research has identified other broad health benefits, including supporting healthy bowel function, increasing the production of important short-chain fatty acids that provide energy to the cells of the intestinal lining, boosting immune function, aiding in the digestion of difficult-to-break-down compounds like lactose and casein, and enhancing detoxification of harmful compounds.

Because probiotics are living organisms, there are various challenges associated with their manufacturing and distribution. For a probiotic to be effective, it must be shelf-stable through the expiration date and precisely delivered to the intestinal tract, where it can have maximum benefit. The microorganisms in FloraBoost are protected, sealed, and freeze dried away from moisture, heat, light and oxygen. This allows the bacteria to remain dormant until they are exposed to moisture in the GI tract.

FloraBoost is a probiotic formula for children, designed to deliver live bacteria that promote healthy gut microflora, protect intestinal integrity and boost immune function. The formula contains three strains of Lactobacilli and three strains of Bifidobacteria, as well as Streptococcus thermophilus and Saccharomyces boulardii, an extensively researched microorganism shown to help restore microflora balance by enhancing commensal organism function. The eight strains in FloraBoost have been strategically selected based on research supporting their survivability and adherence to the intestinal tract. FloraBoost comes in a powder form for easy administration to children.

Add one scoop (1.7 grams) to a glass of water or the beverage of your choice, stir and drink, or as recommended by your health care professional

Lactobacillus acidophilus is a beneficial bacteria strain that is normally found in the intestinal tract and mouth, and is commercially used in dairy products for the production of acidophilus-type yogurt. L. acidophilus ferments various carbohydrates to produce lactic acid, which increases the absorption and bioavailability of minerals, including calcium, copper, magnesium and manganese. The production of lactic acid also promotes health by creating an inhospitable environment for invading microbes. L. acidophilus has been

shown to protect intestinal cells by competing for adhesion space in the gut against harmful bacteria, such as E. coli. The L. acidophilus strain in FloraBoost has been specifically chosen because of its strong adherence and survival attributes in the GI tract. It has been demonstrated in vitro to tolerate exposure to gastric acid and bile salts, and has the ability to withstand antibiotics including Ciproflaxin, Polymyxin B and Tetracycline. In addition, a study of 73 children (aged 3-24 months, with bouts of occasional diarrhea and mild or moderate dehydration) found those given 10 billion CFU of L. acidophilus had a decreased duration and quantity of watery stools than those receiving placebo.

Lactobacillus paracasei has been shown to protect against the harmful effects of bacteria such as Staphylococcus aureus (S. aureus). L. paracasei colonizes the intestinal tract by reinforcing defense mechanisms that support an immune response. It does this by supporting T-helper cell production and secreting secretory IgA (sIgA), an antibody critical for supporting intestinal immunity. L. paracasei Lpc-37 is a gastric acid-resistant strain and has been shown in vitro to withstand antibiotics such as Ciproflaxin and Vancomycin. Together with L. acidophilus, L. paracasei has been shown to reduce duration of occasional diarrhea in children with long-term loose and watery stools (6-24 months).

Bifidobacterium bifidum is a normal resident of healthy infant GI tracts and usually colonizes within four days of life. It has been shown to effectively compete with harmful bacteria, such as E. coli, S. aureus and Campylobacter jejuni, which suggests B. bifidum’s lactic acid and acetic acid production provides an antagonistic action against pathogens to help maintain microflora balance. A study of 55 infants (5-24 months given either a formula with B. bifidum and S. thermophilus or non-supplemented formula for a course of 17 months) found that those receiving the probiotic formula had less occurrences of loose and watery stools (7% vs. 31%).

Lactobacillus rhamnosus has been frequently used in the prevention and treatment of occasional diarrhea in children. Among 69 children, randomized to receive either a mixture of 20 billion CFU per dose of L. rhamnosus and L. reuteri or placebo twice daily for five days, those receiving probiotics had reduced duration of loose stool (82 hours vs. 101 hours in the placebo group). After early intervention with probiotics the length of hospitalization was reduced by 48% in the probiotic group. L. rhamnosus has also been shown to promote GI health by increasing intestinal cell replication.

Among 80 infants, 6-36 months old, with occasional diarrhea, given either a formula supplement with Bifidobacterium lactis and Streptococcus thermophilus or non-supplemented formula, those receiving the probiotic formula had fewer incidences of diarrhea. A second study of 80 breast-fed children, 6-24 months old, with occasional diarrhea for fewer than four days, found those given either a yogurt containing S. thermophilus and L. bulgaricus had shorter hospital stays, better weight gain and reduced loose stool frequency.

Saccharomyces boulardii is probiotic yeast that was first isolated from the skin of the tropical fruits lychee and mangosteen in 1923 by French scientist Henri Boulard, following the observation that mangosteen consumption controlled occasional diarrhea in natives of Southeast Asia. S. boulardii plays a role in supporting immune defense by increasing levels of a crucial antibody, sIgA, and creating a first line of defense that helps bind and clear harmful bacteria. In one study, 200 children with occasional diarrhea were randomly given 250 mg/day of S. boulardii or placebo. Stool frequency and duration of diarrhea were greatly improved in the group that received the S. boulardii. Among 269 children (6 months-14 years) given either antibiotic treatment plus 250 mg/twice per day of S. boulardii or placebo, those receiving the S. boulardii had lower incidence of loose and watery stools. 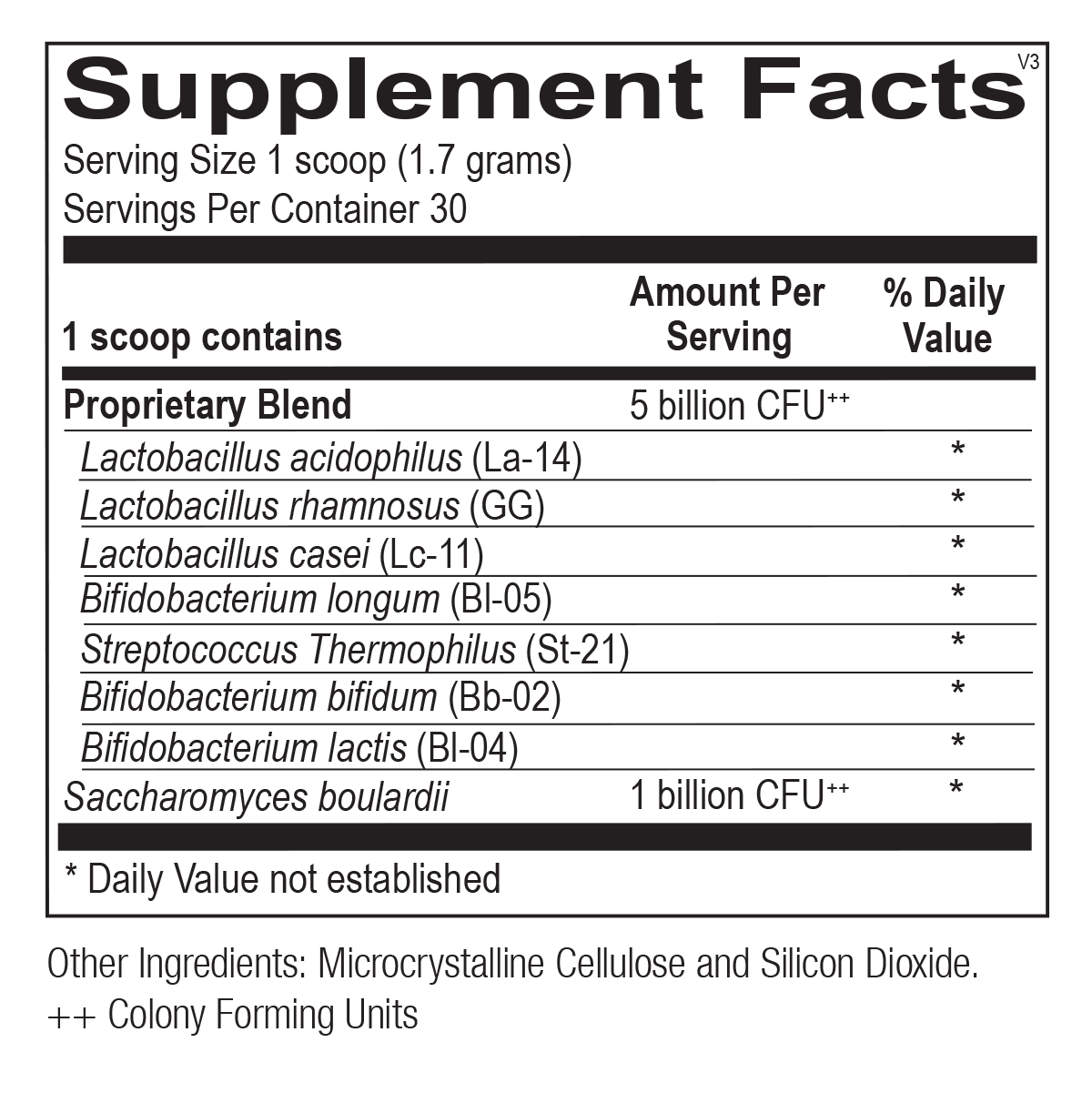 Be the first to review “FloraBoost” Cancel reply